On the 15th of September we will be discussing the concept of Circular Economy with Thomas Rau.

To illustrate, Thomas Rau applied this concept to his office building in collaboration with Philips. Instead of buying lightbulbs, he wanted to buy the service of light from Philips. The idea is that whenever the producer of the product is responsible for the lifespan, it will try to make the product last as long as possible.

Will the concept of Circular Economy radically change the business models of our economy? Are we going to enter a new era of economic organization, more and more based on services instead of ownership?

Thomas Rau is ranked fourth on the Sustainable top100 of Dutch newspaper Trouw. He has been awarded ‘Architect of the Year 2013’ and received the Oeuvre Award from from the magazine Architect ARC13 for his contribution to sustainable architecture over the past 20 years, as well as for: “his inspiring contribution to the social and architectural agenda.” He is founder of Rau Architects and Turntoo. 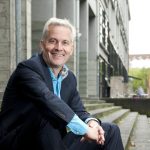